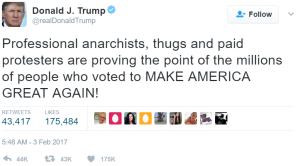 It’s easy to laugh at the thought of significant numbers of “paid protesters”. After all, there are several practical hurdles to overcome.

There are many other problems of course. So when you ask a conservative friend if they believe that all those protesters are paid by somebody, they’ll say; “Of course not! Only a fool would believe that story.”

But here’s the problem: they’re supporting the guy who does believe it. Or at least, says it with a straight face, right after saying there were 3 million illegal voters, or that he won the EC in a landslide, or that he knows more about ISIS than the US intelligence. They’re looking at a guy who tells obvious whoppers, in charge of the world’s largest economy and nuclear arsenal, and… what? That doesn’t bother them? Is there nothing that would make them drop anchor and start checking their ethical maps?